Don't come to Prapic looking for a cathedral or castle... it's culture is far more modest - in simple words it is rich in being. Built under the blessing of the church of Saint Anne, the classic dry stone houses, with their almost austere alpine character are evidence enough to the history of this hamlet and the tough life of its inhabitants.

Right at the end of the valley and surrounded by imposing mountains and cols, such as the Tourettes and Terres Blanches (giving you access by foot to the Val de Durance), Prapic gained a reputation of being 'the end of the world, where even flies avoided!' An image undoubtedly earned by the inhabitants who have survived for generations in this remote village far away from any towns or commerce.

Situated at the gateway to the Ecrins national park, the village is the starting point for numerous walks and treks suitable for all levels like the 'tombeau du poète', the 'plateau de Charnière', the 'saut du Laire'...

Prapic's heritage is both modest and remarkable : the Sainte-Anne church, formerly located at the top of the town, was rebuilt by the inhabitants in 1880 following a fire that occurred in 1867. The fountains with mouths decorated with animal heads and basins called "bachats" are numerous in the hamlet. They were used as washhouses and drinking troughs.

The first houses still visible today were built in the 17th century. The sheepfolds were built under the same roof as the family dwelling, forming tall houses with gable walls often braided for the ventilation of the hay. The finely carved entrance doors are a way of identifying the family. Each house was designated by a nickname to differentiate the families of the same name.

Venturing out of the hamlet towards the Tomb of the Poet, one will notice the Clot mission cross, adorned with symbols of the passion of Christ. On the Saut du Laïre road, the Coulet oratory marks the intersection with the path leading to the Basset plateau. Higher up, the chapel of La Saulce is a place of pilgrimage, where the inhabitants went during the years of drought, before wetting the banner in the Drac, according to tradition.

In the heart of the hamlet, two restaurants offer you the opportunity to savor the best of local specialities : tourtons, donkey's ears, local lamb, crucibles, fruit pies... Also worth visiting : the museum of daily life and trades from the past.

8km away from Orcières Merlette 1850 and 4km from Orcières village.
On the edge of the village of Prapic, at the entrance to the Ecrins National Park.
Enjoy the calm and the shaded... 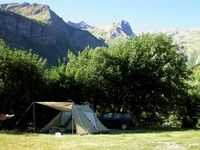 And Gite d'Estage Le Bijou (20 places) in free management all year round.
Gîte des Ecrins: 70 m2 apartment with 2 bedrooms, sleeps 5 in single / double beds and a sofa bed in the...

The 'La Casse' museum opened its doors in 1987, with the aim of transporting its visitors to a bygone era, the Hautes-Alpes at the beginning of the 20th century. Gift and Prapic... 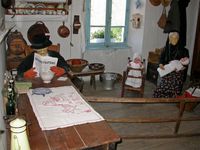 Farm - Hostel located in Prapic starting hiking trails in the Ecrins National Park.
Specialties and lamb of the country.
Sale of lamb and vegetables from the kitchen garden live. ... 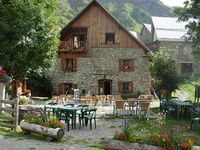 The Orcières Tourist Office, together with the Ecrins National Park, provides information at an Information office in the centre of the hamlet of Prapic.
There, you can find all you...

Concert in the Church of Prapic at 5 p.m.
Classical music on flute and keyboard
The Handel Sonatas 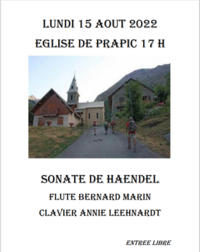